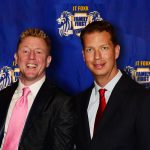 Voice Over: JT Foxx is my guest tonight. Thank you so much for joining us on the show.

JT Foxx: Thank you. I love your show.

Voice Over: J.T. Foxx in our Cape Town studios, thank you very much for being here.


Voice Over: That’s JT Foxx, with Al Pacino and Sylvester Stallone, walking together about to go on stage. Just nine years ago, he was completely broke and now he owns over 50 businesses and brands. He has bought and sold over 500 pieces of property and has done business and spoken in over 30 countries. Many refer to him as the world’s number one wealth coach and he knows signs out and does business with some of the world’s most successful people. He changed his life. And some say he has changed countries. His motto is simple “Powered by your success” of millionaire underdog JT Foxx.

JT Foxx: This is JT foxx, the world’s number one wealth coach, serial entrepreneur, best selling author, millionaire underdog. And I’m here with my two very good friends. The amazing entrepreneurs John and Patrick. In fact, we just finished a three day high level mastermind with the top entrepreneurs at my house in Thailand. And let me tell you something, the topic of conversation was this, “How do we create more entrepreneurs? How do we help people 20 to 35 or any age finally start their business or if they had a business that hasn’t worked, how can they take control of their financial destiny?” And we are some of the top entrepreneurs in the world here and we came up with John and Patrick.

For the last 20 years they’ve created more entrepreneurs than anyone I’ve met. They’ve created opportunity not only in Southeast Asia, not only in the Philippines, not only in Thailand but all over the world for people to take control of their financial destiny. And they came up with the most revolutionary plan. They’re willing to finance you. They’re willing to invest in you. When is the last time the two tycoons in the industry that they’re in decided to finance you, to invest in you first.

This is not how much money you make, it’s how much you give. And these two guys give.They love the game; but let me tell you something. There’s two ways of doing. You could do it yourself and probably will fail, 98 percent of businesses do after five years or you could work guys like that and they can hold your hand, step by step. What’s it all about, you need to talk to them.

Everywhere I go, they get surrounded. Everybody wants to know them. And I’m impressed and I don’t easily endorse people but the character, the honesty, the vision that these two guys have for people want to take their life, their business to next level. You need to contact them; because if you don’t you’re missing out. The less excuses, you have, the more successful you are going to be.